Russian experimental poetry is a quite vague phenomenon. It is difficult to determine its borders and specific forms in which it exists, and it is perhaps impossible to accomplish within a single article. The reason for that is, first of all, the lack of theoretical working up of the theme. The phenomenon seldom falls into the focus of attention of Russian researchers, and when referring to it one often guided more by intuition and personal taste than by major theoretical frameworks or ready definitions.

In addition, there is not so much information about current processes within the movement. There is only one magazine in Russia that with some reservations can be ranked as specializing in experimental poetry – ‘Drugoe polusharie’ (Another hemisphere; the editorial board states the magazine’s specialization as “the magazine of literary and artistic avant-garde”). Some experimental pieces often appear in the ‘Slova’ magazine (Words), which is dedicated to a broad spectrum of genres. The almanac ‘Chernovik’ (Draft) published in USA and Kiev is dedicated to mixed media and also sometimes publishes experimental poetic works.

So there are few grounds for big generalizations and theoretical observations that might relate to the phenomenon of experimental Russian poetry in general, thus I will limit myself to commenting on the works of several authors whose art I know well. I will also have to avoid the reference to the textual poetry because of the enormous difficulties of translation, and will focus primarily on visual / concrete poetry. Hopefully, these individual edges of Russian experimental poetry, which I will describe in this article, will help to form an approximate image of the whole phenomenon.

Willy Melnikov knows about a hundred different languages. And thinking about that help us to understand and explain his works more deeply. He makes his pieces by means of several different techniques that he calls the author genres. One of the most revealing is lingvotapestry. The works of this genre shows a mix of the inscriptions in various languages forming an integral visual composition. 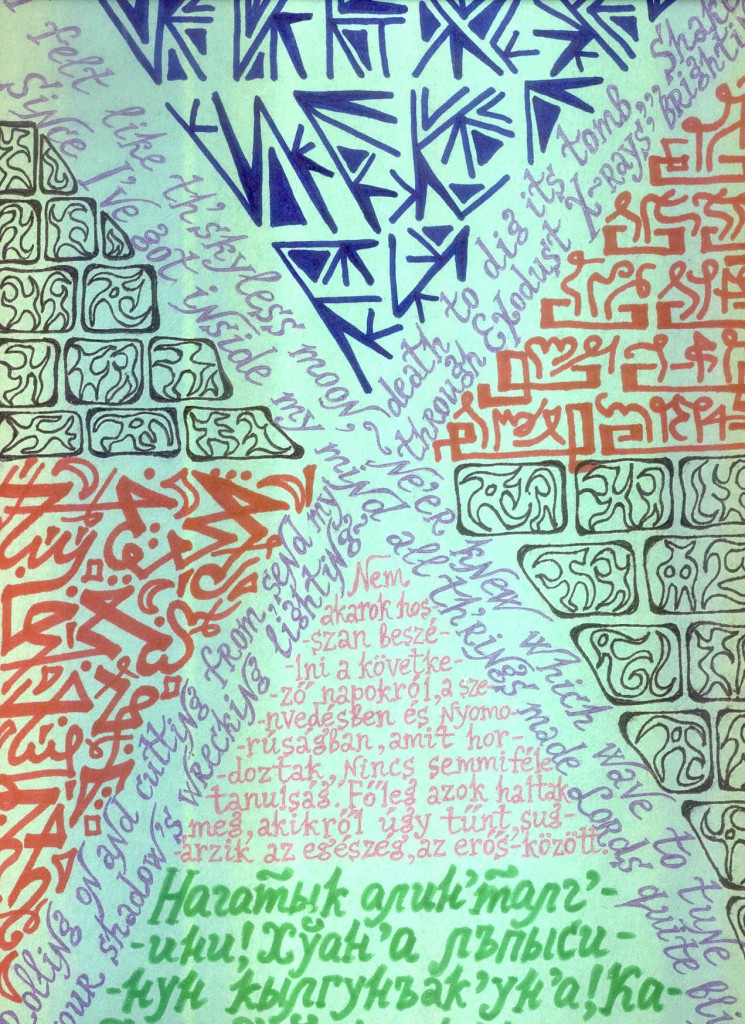 The fabric can be woven by languages ​​belonging to different linguistic groups, different cultures, including extinct languages and cultures. In order to judge the precise content of the texts, one need to know as much languages ​​as the author, but we can at least assume that among the components of lingvotapestry there are fictional languages invented by the author. In any case, hardly there is a viewer who can actually read all the texts woven into the fabric, which means that Willy Melnikov’s works combine sections of readable and unreadable text – fragments we can read, fragments we can reproduce as senseless sounds (texts written in known alphabet but in unknown language), fragments we are not able to reproduce at all (unknown language and unknown alphabet). In Willy Melnikov’s works the game of multiple and complex meanings brought to existence. It displaces and replaces regions of sensible and senseless, depending on the language skills of the reader / viewer. 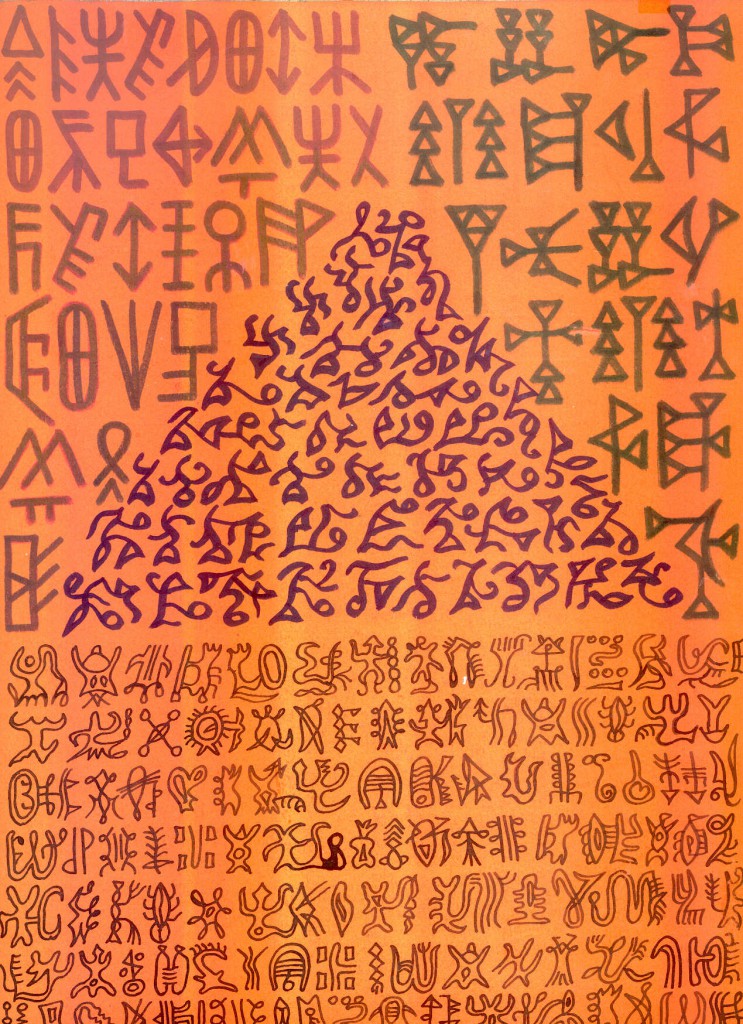 This way of writing, of course, has a poetic dimension in the traditional sense of the word – this is a ‘verse’. But, in addition, lingvotapestries fulfill the old precept made by Russian avant-garde of the early 20th century: the need to move the word and text to be a separate category of visual arts, to endow words with visual expressiveness regardless of their sense. One also can notice here a connection with the contemporary forms in art – in particular, with asemic writing. The vicinity of readable and unreadable symbols, texts and words encourages the reader to begin a free interpretation, and also attempts to “read” the story from the texts forming lingvotapestry as it is typical for interaction with asemic works.

Moreover, we can say that the works of Willy Melnikov have their personages – the languages ​​that do not just present in the works, they speak and interact, communicate with the audience and each other – maybe in conflict, or perhaps in support or complementation of each other … We cannot figure out the exact relationship of meanings and the texts in the works, but intuition and imagination enable us to invent them, and thus, while seriously reflecting on the works of Willy Melnikov, we become participants in the act of creation.

Dmitry Babenko is a participant of mail-art movement, book-artist, artist and visual poet. Few of his works appear as a separate, individual canvas which takes place on the wall (or any other plane) and is open to contemplation. This is usually some more or less functional things, with which you can interact – to open them, to close, to feel, to flick through, to unfold and to fold, etc. By functional characteristics it is more ‘things’ than works, but substantially and formally, these ‘things’ are deeply rooted in the world of art.

Let us take as example the art object, consisting of a bag, and the four books titled as “Work”, “Money”, “Holiday” and “Future.” 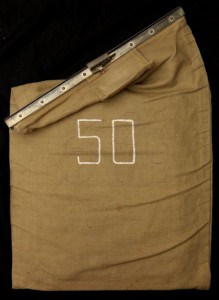 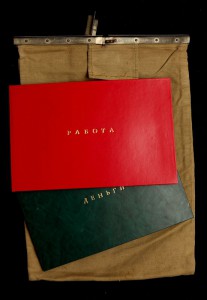 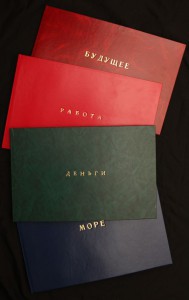 Books are put into a bag and do not have particular order. These books can be called a collection only if it is the series composed by reader in his mind. Playing with the combination of those simple headers and the associated complex sets of meanings can be quite long and interesting in itself. What comes first in the collection? What is last? Each variant tells unique story…

Inside the books we find a selection of ads torn from the walls and placed in an aesthetic frame in an easily recognizable and distinctive style of Dmitry Babenko.

Ads about jobs, loans, tourist trips to the seashore and offers of fortune-tellers, astrologers and mediums predicting future are placed on a thin, textured paper.

The transition of simple texts from the functional context of everyday life to the context of an art object, frees them from the narrow utilitarian context. Here, within the aesthetic environment, the brilliance and poverty of their composition is revealed, their content becomes kind of melodic mantra that hums generous and seductive promises that will never be fulfilled to your ear.

Dmitry Babenko makes the hidden world of temptation that pervades everyday life clearly visible. It is coming to us from the things that usually seem to us simple, plain and familiar.

That is another evidence of how the change of context unleashes visual and poetic power of ads, captures our view, and reminder us that the world is complicated, and that it costs too much for us to take it as simple and well known.

Dmitry Babenko’s works invade the functional structure of everyday life, reshaping it to the needs of the arts. They are a kind of art’s secret agents who pretend to be something that you can take for a book, box, board, but preparing a surprise to those who will interact with them. You can accidentally pick up the object, taking it for something ordinary or just fun, then you open it… and you are lost in the complex, deep, interesting world of aesthetic images and poetic expressions for a long time.

Sveta Litvak is one of the continuer of Russian avant-garde of the early 20th century; she works in a variety of genres – prose, poetry, performance, drawing, painting, visual poetry, asemic writing, and she often introduces a portion of experimentation into her works. 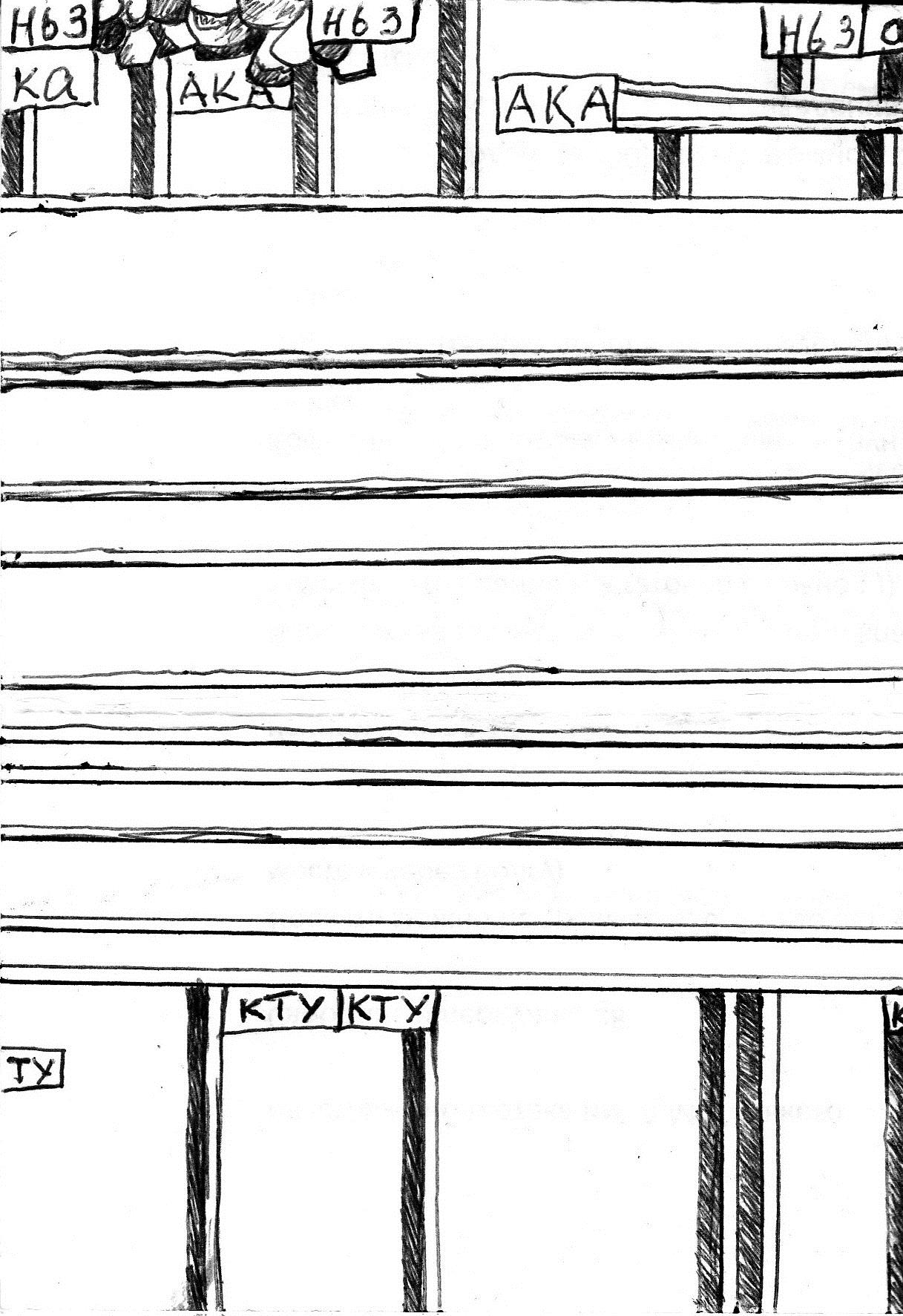 Sveta Litvak’s visual works have both simple and complex textual content. This is often meaningless sound mix in the manner of zaum – short, sonorous, loud, expressive harmonies that give a visual work its own speech and language. In Sveta Litvak’s works words are separated from the linguistic meaning, but do not become separate visual images. They endow the works with phonetic content, complement and extend their own artistic space by sound dimension. 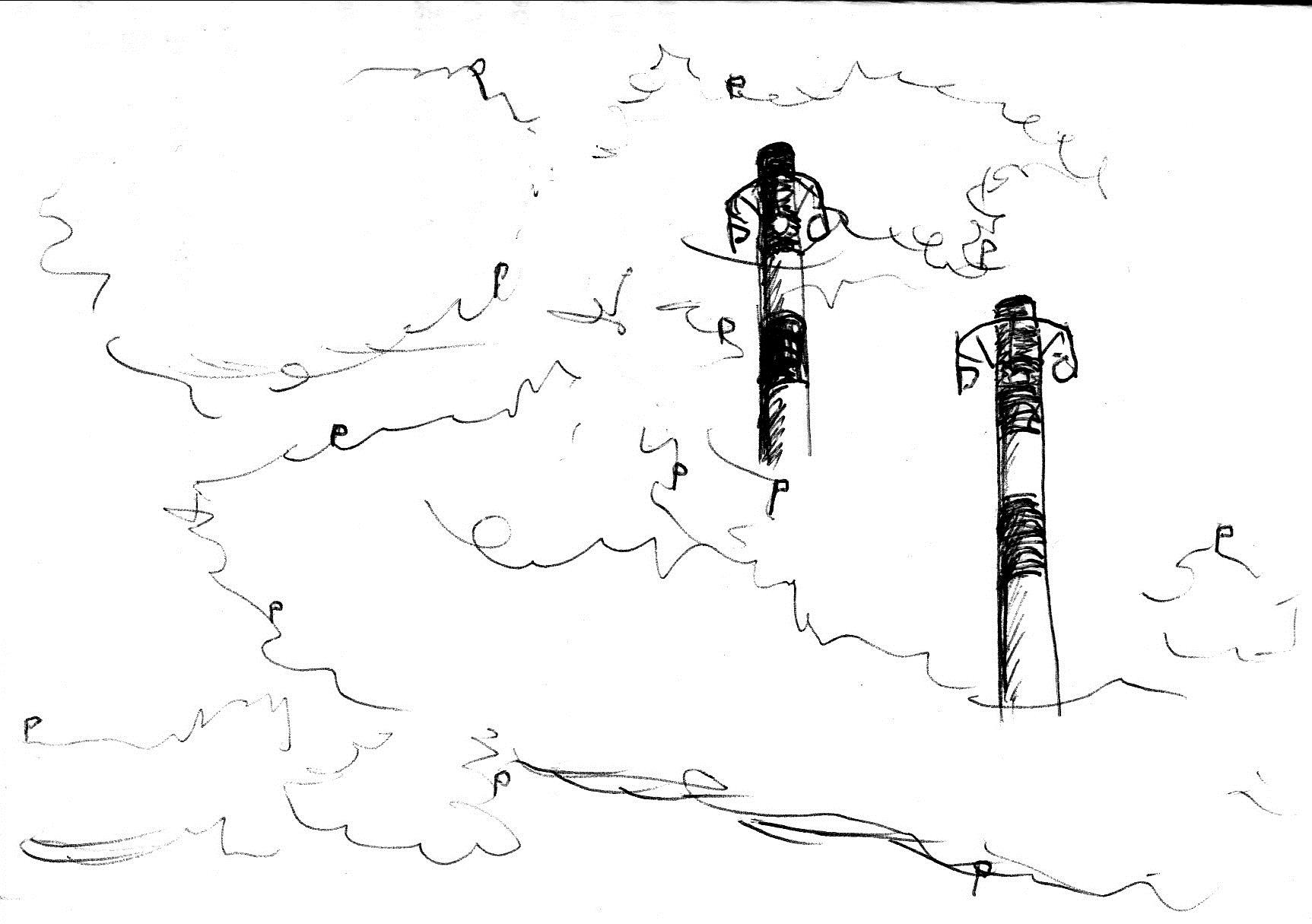 Word and visual image remaining in each of its ‘natural’ areas interact without mixing with each other, and at the same time forming an aesthetic integrity. In such non-hierarchical structures sound supports image and image supports sound, revealing additional dimensions to each other.

Edward Kulemin works in several genres, he is the author of conceptual poetry and prose, several essays and a lot of visual and video poetry. Expressive and at the same time economical means of expression in Kulemin’s aesthetics easily attracts attention. Brutal, relief and often black and white images attract the sight and are very memorable.

By experimenting with techniques, imagery and media, Edward Kulemin seeks and finds the relationship between the spaces of art and everyday life, looking for ways to start a dialogue with the audience, to involve it in the creation of works of art. Art project ‘Fill in’ is very indicative in this respect. Project materials are blank fillable paper forms with the caption “It is poetry.” The forms were partially distributed at all sorts of events (as related to art, and are not related), partially plastered on walls in Smolensk, Russia and partially left in piles in public places. The results of some interactions of the forms and with the chaotic urban space have been documented and returned to the world of art as visual works. 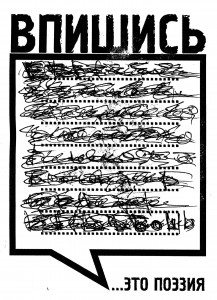 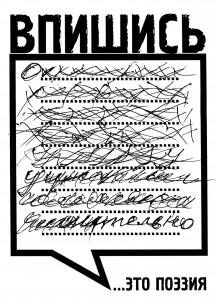 Perhaps the notion of involvement describes the essence of the Kulemin’s experiments well. The author seeks to involve the viewer, his collaborator, in an active participation in creation of an artwork. Kulemin’s projects are not just ‘interactive’ objects that respond to incoming stimuli, they call for unity and collective creativity; they address the outside world as a whole.

An example of the involvement of a different kind is the series ‘Poetry of the cash register’ in which the artist uses materials that are at hand for their works – they were receipts this time. 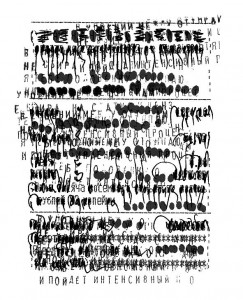 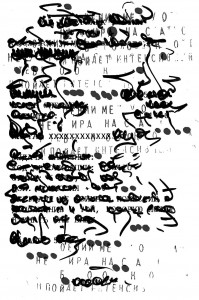 One can call these works a kind of commentary on the structure of the sales receipt, an attempt to sow its similarity with the structure of a verse, to demonstrate that the world is filled with such constructions, and that there is nothing exceptional in a poetic text. Looking at the receipts, we understand that we stumble upon structures of this kind all the time, we just do not have enough observation to see the poetry in the sales receipt or, say, a computer program. In this series of works Edward Kulemin demonstrates the involvement of art in reality and shows that if not the spirit, but at least form of art pervades the entire world, every thing.

I have tried to show some of the features of the contemporary Russian experimental poetry through a brief analysis of the works of several authors. Of course, it would be a serious exaggeration to say that the works express features of whole process, mobement or the major trend in Russian art. Atomization and insufficient development of relations and flows of informational exchange within and outside the art community in Russia does not allow to make such generalizations. However, I hope that I was able to highlight some of the themes, techniques and problems that can at least partially express the specifics of experimental poetry in my country.