Baba Google Strikes Again. The last time i’ve covered Google’s exploits in the field of artificial intelligence, machine learning and natural language processing was around the time Talk to Books was presented. It was fun but not much else. 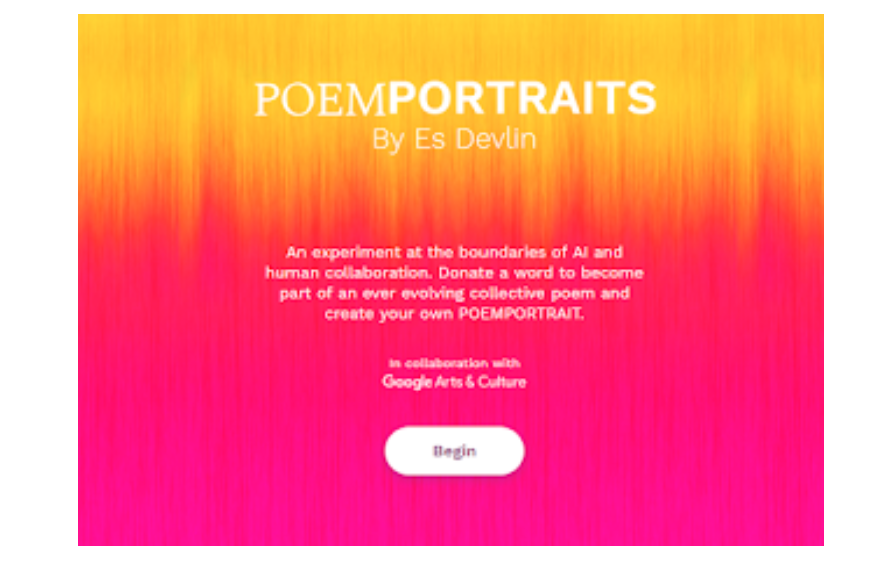 Developed by Es Devlin with an assistance from Google’s Ross Goodwin, Poem Portraits is another attempt to explore the possibilities of natural language generation in a specific environment. This time – it is poetry. Because, you know, poetry is the most effective way of showcasing the aesthetic possibilities of language and push the boundaries of comprehension deep into the parts unknown. Poems do stuff other forms of literature skim over – such playing with semantics, clashing the disparate meanings of words, subverting the narrative by context and overall wrecking the common perception of language use. This makes it a good to choice for natural language processing algorithms. It is challenging and the results may be stagering.

Also – it helps to refine customer support conversational interfaces, but that’s absolutely not the point of it all. Not even a bit. For real. For sure. Yup.

Poem Portraits is all about composing a text that is technically poetic based around an input query. The user is asked to donate the word. After the word is entered, the thing does a fancy animation with the word being sliced up and digested (by algorithm). Then it overlays the text on the user’s selfie because gimmickry. Or you can skip and get a semi-abstract thingie with the text.

Poem Portraits uses semantics to figure out the best fitting sequence and applies its extensive vocabulary and sample base in order to compose a short piece of text. The algorithm is trained on 19th century poetry (it is stated that algorithm ate around 25 million words – now that’s an alphabet soup). This means it is verbose and flowery and diverse in stylistic flourishes. These features make it easier to embellish the input query with ornate verbiage. The resulting text is supposed to be poetry by proxy – because it was generated out of poetry. And it seems like poetry, all the ingridients are definitely there, except it is slightly off.

But at the same time – Poem Portraits is an interesting case of simulacrum. The thing is – Poem Portraits exploits the elusive notion of poetry, not the poetry itself. It revolves around the feel that is not exactly present in the text or its perception or it is present but not really there.

Poem Portrait simply makes impressions which cause a certain kinds of reaction based on common perception of the concept of poetry. It clicks and that is it. It is a perfect fodder for “yeah, uh-huh”.

The most interesting thing about it is that the thing doesn’t know the word “eellogofusciouhipoppokunurious” but it knows “floccinaucinihilipilification”. It makes no sense regardless but it is baffling that one word is there while the other is don’t. Whatever.