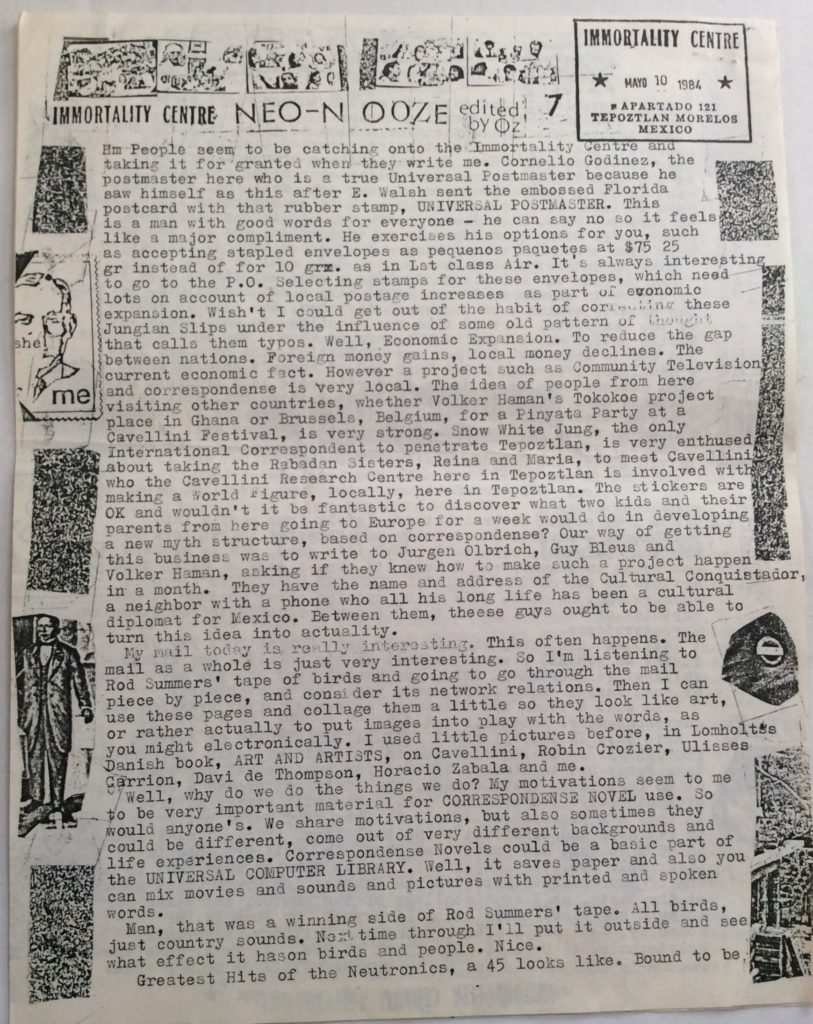 The use of the postal system for the distribution and exchange of information, ideas and cultural items among artists harks back at least to the Dadaists, most likely to the dawn of the postal service itself, as the need for collaborative collegial camaraderie between international artists has been an ongoing historic concern. Artists use the mails for its cheap and efficient qualities, playing with the symbols of the postal service (rubber stamps, artist postage stamps, cancellation marks) for their creative potential. 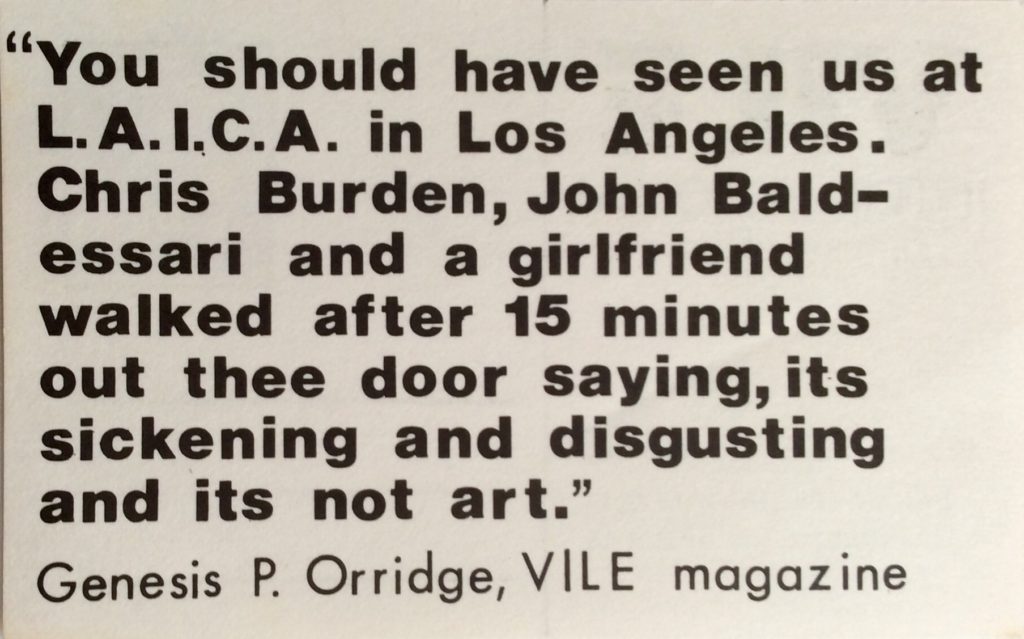 In the late sixties and seventies, due to improved reproductive technologies such as verifax, mimeograph, instant print and photocopy, artists were able to replicate their graphic and literary progeny and distribute it to a global audience via the postal service at affordable prices. This caused an explosion of inexpensive publication opportunities be it periodical, manifesto, print or book format. The finely crafted livres d’art was a tradition of long standing in the fine arts, but their rowdy sixties successor, the artists’ book, struck out for territory often intentionally slapdash, relying on concepts rather than finely honed craft for its contemporaneity. Using these affordable printing technologies, Do-it-Yourself (DiY) culture extended to music (punk and cassettes), publishing (photocopied zines and artists’ books), and visual art (mail art).

Mail Art is a medium of exchange, and as such, it is an art movement as much as an art medium. Her forty years of involvement in the field ably traces the history of the field as it developed from the activities of Ray Johnson, a Black Mountain College graduate, who “was to the letter what Joseph Cornell was to the box.” Taking an everyday activity and transforming it into an art form, Johnson created a new artistic medium and a new community, predating the Internet as a forum for long distance social and cultural exchange.

This community was especially well received along the North American West Coast from Vancouver to San Diego. In the sixties, a new generation began looking for political, social and artistic alternatives. They found the long distance, time-delayed communication system based on Johnson’s New York Correspondance (sic) School and international artists associated with Fluxus, a perfect foundation upon which to build a new artistic production and distribution system, issuing personally financed publications and formulating non juried exhibitions to keep the emerging community connected.

Johnson was a correspondent of Wallace Berman, a key player among the Beat artists of Los Angeles and San Francisco. Berman was the glue that kept the West Coast Beat scene together, and his periodical, Semina, passed freely among friends, was a physical manifestation of that connection.

Curious about the contemporary avant-garde, Jeff Berner, a columnist for the San Francisco Chronicle and professor at the University of California, Berkeley, searched the world looking for new artistic tendencies, eventually contacting Fluxus impresario George Maciunas, and becoming one of the maestros key lieutenants on the West Coast. Organizer of “Fluxfest” at the Longshoreman Hall in San Francisco in 1968, Berner was also curator of the first Fluxus exhibition on the West Coast with the presentation of “Aktual Art” at Stanford University the same year. It would be some thirty years before another significant Fluxus exhibition would be held in California.

In 1969, Johnson teamed up with his friend painter Joseph Raffael, a New York acquaintance who had taken a position as a professor at the University of California at Sacramento. Johnson curated the first Mail Art show there in 1969, one year before the Whitney Museum’s, “New York Correspondence School,” exhibition, often erroneously cited as the first Mail Art show.

Johnson’s impact on Vancouver artists was considerable, as was the “Eternal Network” philosophy of Fluxus artist Robert Filliou. The “Deccadance,” an early meeting of fledgling West Coast Mail Artists, saluted the concepts of Filliou, taking place in Los Angeles in 1974 organized by Lowell Darling and Willoughby Sharp, bringing together correspondents from Vancouver, San Francisco, Los Angeles and elsewhere. Setting the stage for the event, was the road trip of the late San Francisco artist, Dana Atchley, who set out to meet his correspondents and documented his travels in the artist book, “On the Road,” published in 1972.

The collection is also particularly strong in its inclusion of women artists and traces an evolving feminist consciousness in the arts. Tavenner, along with Anna Banana, and Irene Dogmatic, Judith Hoffberg and Eleanor Antin, all became significant figures in Mail Art. Banana and Hoffberg were central to the expansion of the field with their editorship of VILE and Umbrella respectively, while Eleanor Antin’s 100 Boots postcards have become classics not only of Mail Art, but Conceptual and Performance Art, as well. Indeed, there is much overlap between these three fields.

Mail Art is composed of magazines, artists’ books, exhibition and event documentation, representative letters and postcards, rubber and artist postage stamps, and all of these emerging mediums expanded  on the West Coast from 1961 to 2012. Notable magazine articles were also important, spreading notice of West Coast Mail Art activity to those outside the region. These include David Zack’s cover story in the January-February 1973 issue of Art in America, and the August 1974 issue of Esquire, which focused on the Bay Area Dada group composed of Banana, Buster Cleveland, Tim Mancusi, Monte Cazazza, Charles Chickadel, William Gaglione, Irene Dogmatic, and Patricia Tavenner. 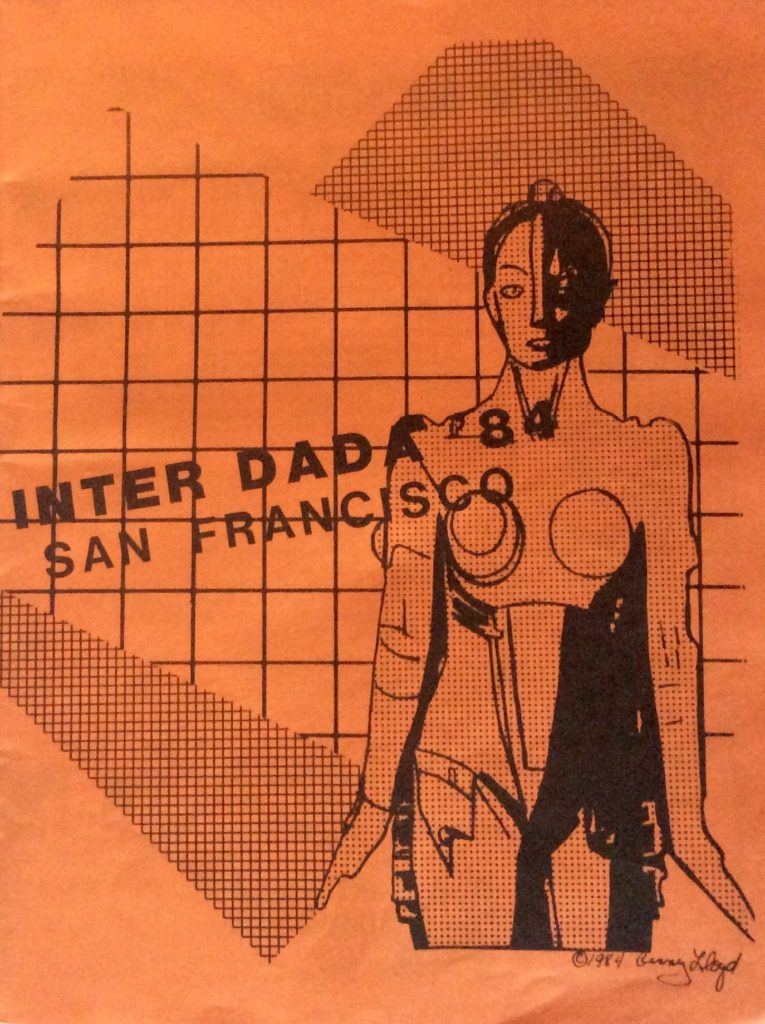 Other areas outside the Bay Area that were particular hotbeds of Mail Art activity include Vancouver, British Columbia, Canada, which hosted the first exhibition of artist postage stamps, curated by James Felter in 1974, and a wealth of other exhibitions and publications spawned by the alternative space, Western Front, which harbored the networking collectives Image Bank and the Corres-Sponge School of Vancouver. Seattle, Washington, remains a strong hub of artist postage stamp (artistamp) production, with key figures Carl Chew, Robert “Dogfish” Rudine, and Bugpost active in the area. Portland, Oregon, was home of “Neoist” artists Al Ackerman, David Zack, and Ishtvan “Monty Cantsin” Cantor, in the seventies, while Los Angeles produced such Mail Art stalwarts as Judith Hoffberg, Lon Spiegelman, Darlene Altschul, Creative Thing and Johnny Tostado.

Other events beside “Deccadance” that brought together correspondents from up and down the West Coast and beyond include Interdada ’80 and ’84, LA Dadafest in 1980, as well as various exhibitions of artist postage stamps and rubber stamps taking place in Vancouver, Seattle and San Francisco including Tavenner’s “First International Female Artistamp Exhibition,” held in 1996, and Harley’s, “Post Modern Post” in 2003.

Mail Art was a path towards cultural networking before the advent of the Internet, remaining a valid and active force in the lives of ongoing practitioners, who view the field as an intimate means of generating both art and community. Artists of the North American West Coast paved the way for an expansion of Ray Johnson’s postal activity and Fluxus thought both domestically and internationally.