My image, me, myself & I
by Bernardo Villar
(Daft Gallery)

Walter Benjamin’s warning toward the impact of mechanical reproduction (technischen Reproduzierbarkeit) in society echoes today, more than ever, with the use of digital photography in social media and its inherent mass (re)production. In this context, taking pictures has become one of the most demanded activities by non-specialized public, perhaps, because today, more than ever, the e-image of one-self invades the space of self-construction. These practices lead to what, both, Kracauer and Barthes, defined as objectification of the subject through photographic procedures, provoking the disintegration between the public and private, the social and intimate. As Barthes argues  “the ‘private life’ is nothing but that zone of space, of time, where I am not an image, an object”[1]. Contrary to this, it seems that nowadays life is lived through images and digital devices. In this sense, the only experiences that are worth having are those that are shown, shared, and “liked”.

“Today, everyone is subjected to an aesthetic evaluation—everyone is required to take aesthetic responsibility for his or her appearance in the world, for his or her self-design. Where it was once a privilege and a burden for the chosen few, in our time self-design has come to be the mass cultural practice par excellence. The virtual space of the Internet is primarily an arena in which my website on Facebook is permanently designed and redesigned to be presented on YouTube—and vice versa. But likewise in the real—or, let’s say, analog—world, one is expected to be responsible for the image that he or she presents to the gaze of others. It could even be said that self-design is a practice that unites artist and audience alike in the most radical way: though not everyone produces artworks, everyone is an artwork. At the same time, everyone is expected to be his or her own author[2].” 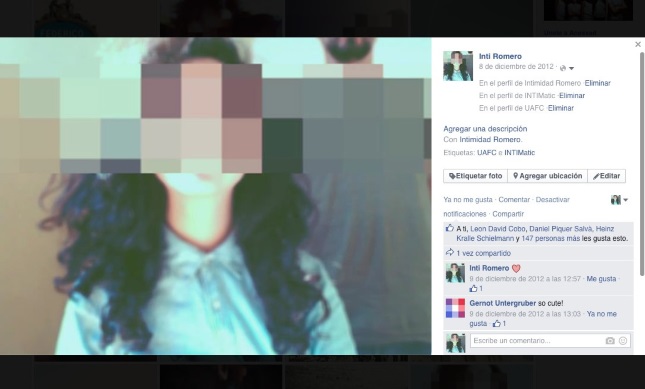 In this scopic regime the project “Intimidad Romero by Intimidad Romero” takes place by designing a personal profile in one of the most hegemonic social media, in order to develop an action that brings along a critique of the media inside the own media. As an inheritor of guerrilla communication, she uses the main socio-technical characters offered by the social media such as pseudo-anonymity, public exposure, and the use of photography as the major way of interaction, and guided by the principles of distanciation and over-identification, she introduces subtle modifications in the regular ways of representation in social media. Her Communicative Action 2.0 dissolves the boundaries between work and author, and presents herself as a self-designed piece of art.

“Somehow, Intimidad is a metaphor and a metonymy of the limits of intervention and identity self-management in social networks… of our lives on the screen. Where we can abandon ourselves (or, on the contrary, take sides) in the ideation and collective construction of our imaginaries and subjectivities. Because what Intimidad does is to take sides in this construction, making visible the absence and what is at stake, the intimacy that -at the very last moment- resists to be shared; in disabled, faceless, blurred, ‘emotionless’ except for the context photos, as an aura without object, ‘without’ main-character. [3]”

In this way, Intimidad is configured as a faceless celebrity known for using her détournement intimate photos as the main source for social interaction in the web 2.0. Through her pictures, Intimidad understands the media not as a mere container but as an essential part in the self-design of identity in contemporary societies. This process reaches its highest point with the spectacularization of everyday life as a direct consequence of the effect produced by digital media and web 2.0 in the circulation of social images.