A mathematical reading of the asemic work ESSE by Cristiano Caggiula through a deliberate adaptation of the correspondence with the professor and engineer Enzo Giordano.

There is island among the words. It has black boundaries and a red bloody territory. Lines ecrust theirselves in a neutral and compact space while spurting signs. They spiral, on a curve binary, undergoing centripetal and centrifugal forces. These forces appear on paper. They are mathematically observed and they due to imagination in this case, without traces of a concrete wind over these signs and the island.
Everything is suspended as it has been drawn, and, yet, it moves.
Therefore, let’s imagine a spiral, as Cartesio and Torricelli would say, let’s imagine a “curva mirabilis”.

Well, peculiarity of spirals is that the radius R, namely the distance from a general point Q  to  a center point P (pole), increases when Q moves clockwise. The radius, following this direction, tends to infinite.  In the same manner, when Q moves counterclockwise,  R tends to zero. This last tension allows Q ,potentially,  to catch up with the center P, which effectively might be reached in the case of an infinite number of rotation backwards made by Q.

These two forces can be mathematically described as centripetal and centrifugal.

Once given that, we can consider to set a time t=0 as the actual present condition of cosmos in a supposed further point A. It will follow that the future ( a future path) will be represented by the centrifugal branch of the spiral which runs from a generical point Q when t > 0, while the past (a retrogade path) will be represented by the centripetal branch when  t < 0.

when the spiral is travelled centrifugally, the point A moves to the future and it expertiments infinite turns in a condition of indeterminateness. It  goes distant from the center, which becomes more and more invisible from the point in movement, as well as the tangent continuosly vary with no limits to infinite. Instead, when the spiral is travelled backwards, the point in movement (A) still can’t reach the center even if it can see this center. A, thus, gains a sort of infinite within the finite. This is because the point’s journey moves, in this latter case, around a clear visible pole (P) never definitely achievable ( P would need, indeed, an infinite number of turns around itself in order to be effectively achieved by A), neverthless P contains and it condenses infinite possibilities of whirling within  its shaping as point on paper. In other ways,  we can say that P has simultaneously the property of infinite and finite: infinite, for its impossibility to be mathematically achieved in a finite number; finite for its possibility to be seen on a piece of paper. 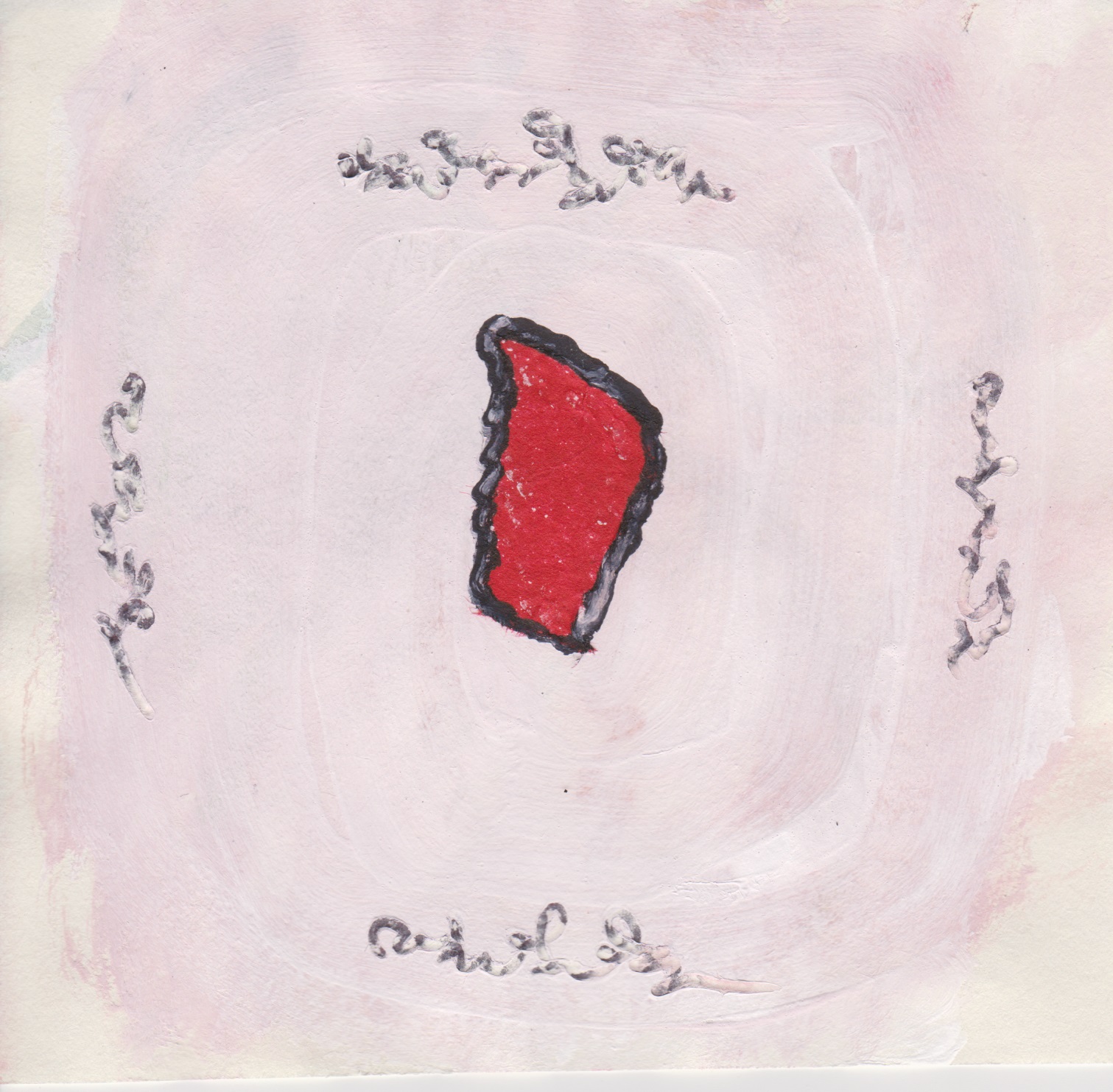 Looking visually at ESSE, the asemic work of Cristiano Caggiula seems to offer cause for reflection on spiralic movements for its title, which in latin literally would mean “to be”, as well as for its  palindrome title which, as the spiralic movement, lends itself to be read in both direction.

Let’s introduce something else.

Still taking into account how spiral functions, aside from mathematical descriptions, we might imagine the point in movement A as a subject, a human subject, who moves into a spiralic binary undergoing these magnetic forces , centrifugal and centripetal.  When this subject will travel for t> 0, he will makes many rounds, discovering numerous and infinites unknown spaces, growing an exciting and dismayed experience in front of indeterminateness and an infinite dispersion until a stop. The subject may will enstablish his own points P along the paths, his own god, puddles, knots in spiralic lines.    Besides, when the subject will travel for t<0 , the more this subject will whirl around P , more he will see the center P, a concrete bloody territory, the substance never achievable but visible, and yet it is this impossibility to reach P which gives flame to the vital magnetic tension of A.  We do not have to forget that, in fact, points in spirals physically move in accordance to the magnetic laws and the gravitational camp.

By this framework, are written words an estrangement from a concrete dimension of being, a disorienting centrifugal wind of discourses which push away A, the subject in movement, from P, a bloody territory in its own physicality?

In ESSE, the center, by holding the speeches, differentiates itself as logos.

Although those words, which whirl around a center, present theirselves as signs and not as a signifier which refers to a proper signifying and they offer a reading as a traced gesture that arrests the semiotic process of signification by capturing the authentic presence produced by the signing, it is not a linguistic neither a semiotic analysis the one here proposed, thus, we can allow us to think the gesture as a willingness of existence, dispersed in the movement when it is unconnected to its vivifical center. Hence, again, the red core of ESSE as P (center), from which the point in distance moves far and to whom it tend to, while turning and gesturing under centripetal and centrifugal wind forces.